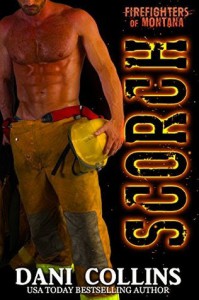 Never having a place to belong Vin Kingston is gearing up to move into his late friend and Captain's home. He's spent the last few months fixing it up. After a childhood filled with foster homes and a failed marriage in which he's already lost one house, this place will finally be the one place that is his.

Losing Russ in a tragic smoke jumping accident has been hard on everyone. Especially Russ's wife Jacqui, who has till now hidden herself in Florida so that she can mourn away from the prying eyes and inquisitive minds on the inhabitants of Glacier Creek. Having had her entire relationship scrutinized and directed by the close knit community, Jacqui needed a break. Vin is her only link to home and they have unexpectedly built a great friendship.

Now she's returning to tie up loose ends but realizes that Florida holds no place in her heart. Glacier Creek is her home and making sure that headquarters on the Glacier Creek Smoke Jumpers runs smoothly is all she's ever known. So when she asks the new Captain for her job back, Vin sees his dream crumbling before him once again.

But their friendship has turned into something Vin does not want to admit. His feelings for Jac are strong but he doesn't want to dishonor the memory of Russ. Jacqui wants to explore their relationship but with so much emotional red tape in the way Vin doesn't give her the chance. When another tragedy in the making occurs, Vin is forced to recognize that maybe the best thing in his life and is the one thing he's been holding at arm's length all this time.